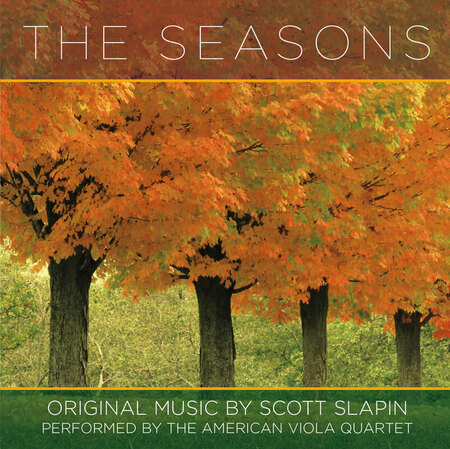 I wrote the music for this album between 2016 and 2018. While I've spent much of my time filling in gaps in the repertoire, the first piece, Threnody and Reverie, was a bit of a departure for me. Originally written for the excellent violist Tim Deighton, viola professor at Penn State University, I wanted to write the most *typical* viola piece that exists--- that is to say, something slow and elegy-like. I thought I should have at least one! Then I decided that--- as with most music---  it would be nice with even more violas, too.

I wrote The South Hadley Mass; A Short Requiem (for the Dead Violist) in 2018 for viola quartet. It contains four elements of the traditional mass: Introit (Requiem Aeternum), Dies Irae, Libera Me, and Lux Aeterna. At only around twelve minutes, this is perhaps the quickest overview of the most universal elements of the traditional concert mass; it was my intention that the music be short enough that it could be performed at funerals and memorial concerts as well. If even shorter music is preferred, the Libera Me ('Adagio') can stand alone. I composed this work in my home studio in... South Hadley, Mass.

The Four Seasons of New England begins with Spring. After a brief American-sounding introduction, the listener is introduced to Marvin the Turkey. Marvin's Leitmotif is based on a quote from what might be the most American of American folk tunes 'Turkey in the Straw' and is initially used in a way that sounds like Marvin pecking around in straw. After running around, Marvin settles down for a nap, and this is an opportunity for the other birds to make their introductions: First the white-throated sparrow begins to sing, followed by a mourning dove. Then two dark-eyed juncos show up having an argument, while a black-capped chickadee sings out over them. Eventually all tunes come together in a big springtime party for the birds. For a composer, being able to steal bird melodies without having to pay any royalties was nothing short of a dream. They really should unionize. Summer starts again with Turkey In the Straw--- according to a BBC article I read, it happens to be one of the most popular tunes played by ice cream trucks--- first as it comes from afar and later as it drives away. I rewrote the middle of the tune to make it even more campy. In the middle, the truck stops to sell sugary desserts to children, while bugs begin to swarm and follow it around. The bugs continue to accompany the truck to its next destination. Probably other composers have viewed summer more positively than I do. The Fall is a recap of tunes from the Spring and Summer, things are beginning to wind down and prepare the audience for the Dead of Winter. Geese are heard intermittently flying south for the winter, which segues directly into Dead of Winter, which was the first season I turned into music. During the early months of 2016, I stared out of my music studio into bleak grayness and snow. It was mostly very still, yet every once in a while a gust of wind would come by and blow around a few dead twigs and leaves. I hope to share some of this New England Winter bleakness with you now through this music. This final excursion is only five minutes, so don't worry, later you can go outside and enjoy nicer weather. Unless your weather is equally as bleak right now, in which case, sorry.
​
Polysemic Rhapsody was commissioned by Matt Stamell, owner of Stamell Strings in Amherst, Mass., for his college professor Marvin Bram, a violist. I deliberately included elements of Bram's writings and ideas in the composition of this work (several people--- or in this case instruments--- speaking at the same time to create an overall effect different from their individual parts), and I hinted at Bram's love for Bach with a quote from the "al riverso" fugue subject from the Third Violin Sonata.

I wrote K2VHV Kaddish a few days after my father's death in December of 2018. He often improvised Eastern European Jewish-sounding melodies on his doublebass while warming up, which is the basis for the beginning and end of this short piece. My father was an avid ham radio operator, and the opening communication in search of someone to talk to always began with "CQ CQ de K2VHV" (K2VHV were his call letters) in Morse Code. This forms the basis of the middle section (Somewhere around the age of 14, I got my ham radio license with the call letters KA2YYC. It has since expired.)
​
-Scott Slapin 2019

All tracks were recorded March 31, 2019 at Northfire Studios, Garrett Sawyer, engineer and were mixed and mastered by Larry Bentley at Cellar Dweller Productions. Layout and design by Larry Bentley. Photos by Tanya Solomon. (c) 2019 Scott Slapin

Scott Slapin (b. 1974) is a composer of eight albums of chamber music and a featured viola soloist on dozens of premiere recordings including the first complete viola version ever made of J.S. Bach's Sonatas and Partitas. His playing has received critical acclaim in the American Record Guide, Fanfare, Mundo Clásico, Musical Opinion, and Strad, and his compositions have been performed by hundreds of musicians throughout Europe and the Americas as well as at international competitions/workshops including the ARD, Primrose, and Tertis. At eighteen Scott was one of the youngest graduates of the Manhattan School of Music, where he was the youngest student in the studio of viola virtuoso Emanuel Vardi's (1917-2011). He studied composition with Richard Lane (1933-2004) and made his debut as a composer to critical acclaim in 1989 with an orchestral work in the State Theater of his native New Jersey. Scott has taught/given masterclasses at several academies and colleges in the Northeast, is a former fellow at the Montalvo Arts Center in California, and can be heard playing solo Bach and Paganini Caprices on soundtracks for tv and film. He and his wife Tanya Solomon live in western Massachusetts and have performed together as a viola duo for more than twenty years. For more information, visit www.scottslapin.com and www.violaduo.com.

A native of Geneva, Switzerland, violist Tanya Solomon holds degrees from Oberlin Conservatory of Music and Northwestern University. Her teachers have included Michael Tseitlin, Robert Eshbach, Jeffrey Irvine, and Peter Slowik. A finalist in the International William Primrose Competition, Tanya has performed extensively in ensembles and music festivals throughout the United States and Europe, given many recitals, and soloed with orchestras performing such lyrical 20th Century repertoire as Hindemith's Trauermusik and Vaughan-Williams' Flos Campi. She can be heard playing all six Bach Cello Suites as part of the first complete all-viola recording ever made of J.S. Bach's Unaccompanied Sonatas, Partitas, and Suites (BWV 1001- 1013), released in 2009 on the Eroica Classical Recordings label. Tanya has been a member of the New World Symphony in Florida, the Chicago Civic Orchestra, the Spoleto Festival Orchestras in both Charleston, SC and Spoleto, Italy, the Louisville Orchestra, the Philadelphia Virtuosi, the São Paulo Symphony in Brazil, and the Louisiana Philharmonic in New Orleans, playing in the last four alongside her husband and recital partner, violist Scott Slapin. Tanya formerly taught at the University of Tennessee at Chattanooga, where she was principal violist with the Chattanooga Symphony and Opera. She plays a viola made by Marten Cornelissen of Northampton, MA. Visit Tanya online at www.tanyasolomon.com.

Gregory Diehl is a native of central Vermont and studied at the Eastman and Manhattan Schools of Music. He is an avid chamber musician and has studied chamber music with members of the Cleveland and American String Quartets. He has spent summers at the Spoleto Festival and Musica Orvieto in Italy, as well as the Estherwood Music Festival in England. For several years he lived and worked in Japan, playing in the Gunma Chamber Orchestra and Camerata Gion, as well as smaller chamber ensembles in the Tokyo region. In addition to performing, he is an active teacher and recently completed a long-term training course in Suzuki pedagogy at the Hartt School of Music. He is currently based in western Massachusetts and continues to teach and perform with ensembles throughout the region. In addition to his musical training, Greg holds an MA in Japanese Language and Literature from the University of Massachusetts, Amherst.

Kaila Graef has performed with a diverse range of groups, including a swing band in Baltimore, the Springfield Symphony, and Vermont’s Juno Orchestra. As a violinist with the Wistaria String Quartet, Kaila performs regularly in concerts throughout the Pioneer Valley of Massachusetts, including the Summit House Sunset Concert Series, Plainfield’s Concerts at 7, the Amherst Schubert Project, the Montague Bookmill, and numerous recitals in collaboration with Amherst College. Kaila holds a Bachelor of Music degree in violin performance from Peabody Conservatory, where she was a student of Shirley Givens and studied chamber music with Earl Carlyss of the Juilliard Quartet. She completed her masters at UMass Amherst, where she was a member of the Graduate String Quartet and studied with Marylou Speaker Churchill. Kaila has been a participant in the Heifetz, Musicorda, and Indiana University summer music festivals. A dedicated teacher, Kaila has served on the faculties of the Vermont Youth Orchestra’s summer music festival and the Northampton Community Music Center. Kaila currently teaches at her private studio in Amherst, MA.